Deep inside the sea, difficult to fathom.

Hurt and wounded, with no strength to plea,

I can feel I’m sinking more, unable to try and flee,

“This had to happen, just sooner. Let it be, I fought as long and hard as I could.”

Deep here, I’ve lost the sight of light up above,

Or may be, there is a little, to direct the aim above,

But now, I’d rather stay here,

And not try for a while.

Now, I’d rather not sway anywhere,

Just not fight for a while.

Over a long time, I’ve been broken.

Time and again, I’ve been shredded.

The pieces are a reminder, a token,

“These pieces covered the wounds,

You got, when towards apex, you were headed.”

The wounds that no one knows about,

The laceration that no one cares about.

Got defeated, when I could fight no more,

Still sinking down, a feeling I abhor.

But now, I’ll stand down for a while,

No, neither am I done, nor am I senile.

To get back in, I’ll have to heal,

Prepare self for further ordeal.

“Let sink, not blink. It’s not over till it’s over”

I’m closing my eyes, only to wake up soon,

There’s a lot left to do, to reverse the ruin.

I’ll keep the resolve alive, more than just a bit,

The fire inside me, it will stay lit.

I’ll wake up and punch hard at it. No, it won’t be futile.

Because when I do, it will be nothing else but brutal. 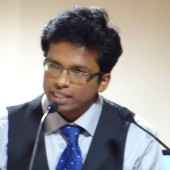